It’s weird that I am writing about editors so much but trying a new editor every few months kind of became a tradition. It spices things up and allows me to learn something new that I maybe didn’t know yet before. Or just discover a new tool that improves my workflow.

When I wrote about spacemacs, I thought spacemacs would be the thing that I would use for everything. Then I ported it to atom with proton and thought that would be the tool I would be using for everything since I could just implement features on the spot that it didn’t have yet. So what happened that I am writing about editors again?

As a VIM fan, I like micro optimizations. One thing in my workflow that I couldn’t stand was hammering j j j j to go down instead of 4j. I knew this keybinding was a lot faster, I just couldn’t get to teach myself to actually use it. After a bit of research I couldn’t find anything that helps me inside atom or emacs - but I found hardmode for vim. It was a bit overkill since it disables all hjkl keys but a good start. Then I found hardtime and it was like my prayers have been answered 🙏. It allows me to use hjkl exactly x times - and I can specify how much x is! Only problem - I need to use raw VIM.

Instead of vim though I grabbed NeoVim as my weapon of choice. Stuffed in my old config file just… to realize that things are not working the way I want them to. Plugins were outdated, keybindings were ‘meh’ and my old vimrc a complete mess. How were I ever able to work with this??

It had to go and something new had to be in it’s place, so I opened up a new vim pane and started hacking on my new vimrc with the goal that everything I use should be heavily optimized, consistent and use NeoVims async features if possible. No more syntastic lags on linting - neomake runs completely async!

I replaced vundle with the async vim-plug and re-added crucial packages that I needed - but something was still missing. I can’t just assign random leader keybindings after having such a blast with the spacemacs mnemonic. After changing the leader to <SPC> and re-arranging the keybindings a bit I was quite surprised to see what I ended up doing - re-creating mnemonic keybindings in vim! I also went the extra steps and moved everything related into a package of some sorts. A bit of sourcing here and there and suddenly I had “layers”! Just like in proton or spacemacs!

What eventually got me really into vim were probably the amazing plugins of junegunn, the guy that wrote vim-plug. I am absolutely impressed about the quality of these and didn’t have this much fun with vim for a long time. Stuff like fzf makes almost every command feel consistent.

He even wrote a color scheme using the official colors of probably my favorite city on the planet - Seoul. Just look how pretty it is: 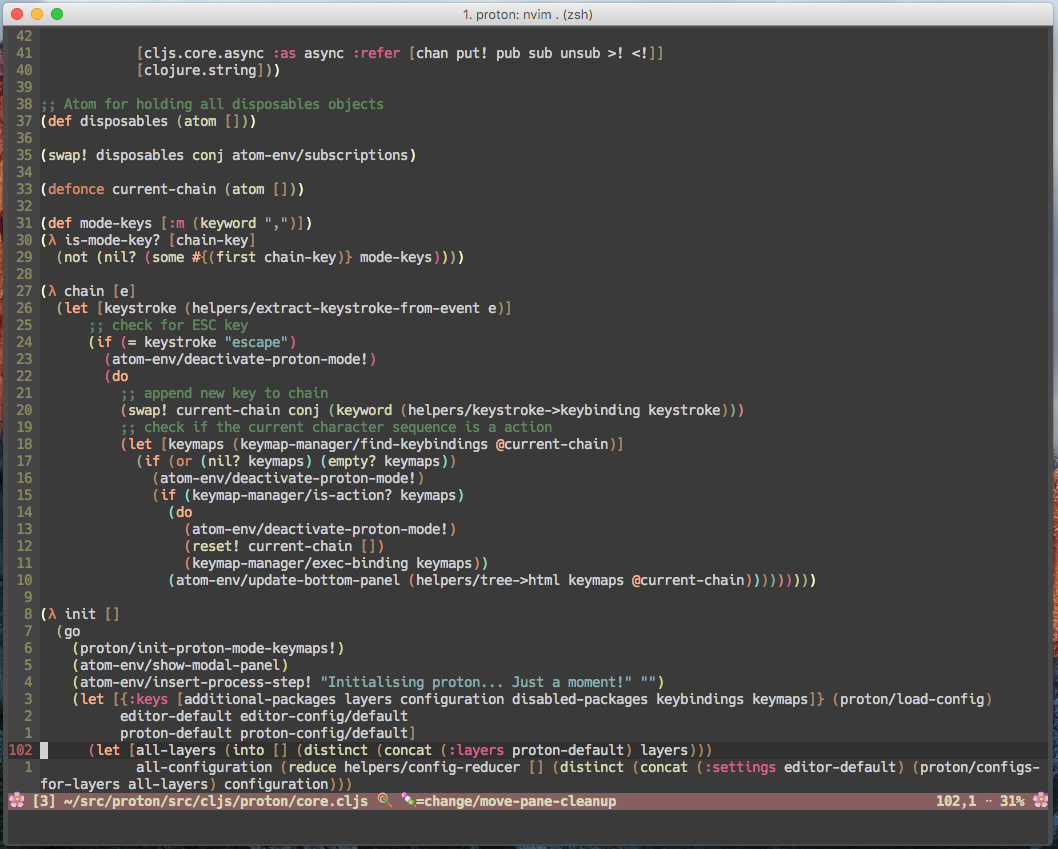 In all seriousness, his plugin collection is amazing and I can highly recommend you to check it out if you are using vim. He might be the next tpope!

hardtime for vim made me go back into vim territory and NeoVim made me stay.

If you are a gvim guy like me, check out neovim-qt. It is a lot faster performance wise and more stable than Neovim.app.

Also my nvim dotfiles are a great starting point to get into vim. Everything is written very decoupled so you could just use whatever modules / packages you want and not source the rest.

Do I now use vim for everyting? Nah, probably not. proton is still my main weapon. These days I’m on a VIM streak with the goal to master the more advanced text navigation commands but most of time time proton (if the atom-shell wouldn’t suck so much battery….).